The disposal and recycling of plastic bags is important for EU countries.

The European Parliament said that EU countries would have to reduce the use of the most common and most polluting plastic bags by at least 80% by 2019.

As noted by the newspaper Waste Management World MEPs noted that plastic carrier bag litter is a major environmental problem, known to pollute water bodies and aquatic eco-systems in particular, and recommend using taxes and levies, marketing restrictions or bans.

According to MEPs, lightweight plastic bags thinner than 50 microns – the vast majority of plastic carrier bags used in the EU – are less reusable than thicker models and become waste more quickly and are also more prone to littering the environment.

Under the proposals plastic bags used to wrap foods such as fruit, vegetables and confectionery should be replaced by 2019 with carrier bags made of recycled paper or biodegradable and compostable bags.

UK: a proposal by a company in London

Eight billion plastic bags disposed of in England each year: Southwark Council is rolling out a new collection service.

Bags will be collected at a new recycling point at Southwark’s recycling centre and then they are reprocessed by plastics manufacturer CeDo, where are washed and shredded into pellets, which are then blown into bubbles of plastic film to form new bags. Over the next three months, Southwark residents on the service will start to receive the first set of recycled refuse sacks that have been generated from plastic bags from the borough. 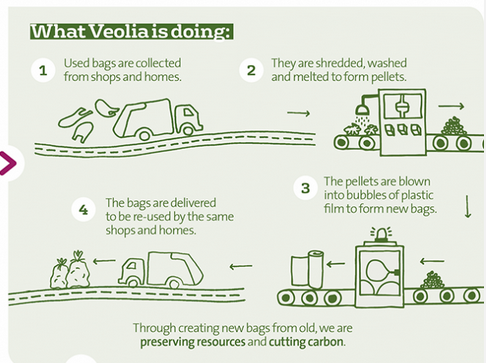