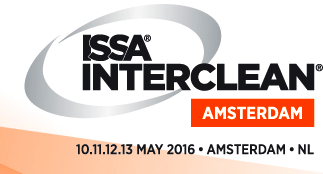 In response to the increasing demand for space and the request for more networking space by the visitors and exhibitors, the organizers of ISSA/INTERCLEAN Amsterdam decided to add an extra hall to the floor plan, creating more possibilities for existing and new exhibitors.

“The first reaction of exhibitors and partners alike has been very positive,” comments Amsterdam RAI’s manager ISSA/INTERCLEAN Rob den Hertog. “The new hall has been added based upon the demands from new exhibitors and also from existing exhibitors to increase their space or change locations. It also generates possibilities for new initiatives and driving further segmentation of the show.”

Adding the new hall with approximately 3.500 sqm made the 2016 allocation procedure a logistic challenge as several exhibitors choose to move into the new hall. As many companies already confirmed their participation during the 2014 event, the stand allocation started earlier than usual. One year prior to the show already over 500 companies are allocated their stand locations. In the new Hall, located in the extension of Hall 1, a new segment for Car Wash equipment and products is under development.

At the same time the attention remains primarily focused on products and networking. ”The Amsterdam event and its associated ISSA educational and other social networking programs offer unique networking possibilities, in the last years the feedback from visitors was the need for more seating areas, the new Hall makes it possible to create more networking and seating areas in the halls to sit down and have a coffee, talk to your peers and check your mail in between your show visits.”, Rob den Hertog adds.

As innovation is one of the most important reasons to visit a trade show, Amsterdam RAI proudly introduces an dedicated area on the show floor for The Innovation Lab.

The Innovation Lab will showcase product innovations from our exhibitors, and the latest scientific technological developments by Accenture, TNO and 3TU Federation.

ISSA/INTERCLEAN Amsterdam is set to take place from May 10-13, 2016 in Amsterdam. The 2016 floorplan is now available online via Issainterclean.com